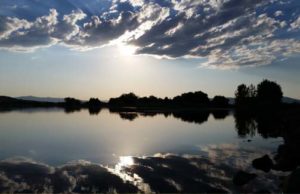 Pablo Wildlife Refuge is located on tribal trust lands of the Confederated Salish and Kootenai Tribes. It is superimposed on the irrigation reservoir managed by the Bureau of Indian Affairs Flathead Irrigation Project.

Pablo Wildlife Refuge is 2,500 acres of water, marsh, and upland grassland. The refuge provides nesting and resting areas for migratory birds and other wildlife.

Shaped by glacial activity approximately 12,000 years ago, the terrain surrounding Pablo NWR is rolling and interspersed with many pothole wetlands.

Fishing is permitted on Pablo NWR in accordance with applicable State, Federal, and Tribal regulations. Yellow perch and largemouth bass are caught at Pablo NWR. Ice fishing is permitted after the waterfowl hunting season has ended and the refuge reopens. 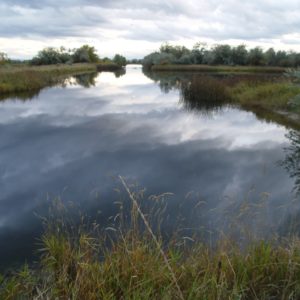 Photography and wildlife observation are encouraged. Waterfowl numbers vary throughout the year. There may be as many as 80,000 in October and November, and half that number in late March and through early May. A few ducks and geese may spend the winter. Nesting begins in late March and lasts through July. The most numerous nesting species are Canada geese, mallards, and redheads. Pintail, American widgeon, shoveler, blue and green-winged teal, ruddy duck, gadwall, common merganser, and coot are also present. Other species of water, marsh, and upland birds are abundant from May to October. Common loons are occasionally seen and this is a good area to see Bald Eagles.

Common mammals on these refuges are the field mouse or meadow vole, muskrat, and striped skunk. Mink, badgers, and porcupines have also been observed.

Although water levels are controlled primarily for irrigation and flood control, the Fish and Wildlife Service works closely with the Flathead Irrigation Project to insure that water levels are properly maintained to accommodate nesting waterfowl. A portion of the refuge is closed each spring to minimize disturbance in nesting areas, and the refuge is closed entirely during the hunting season. There is an active Bald Eagle nest on the Refuge which regularly fledge one to two young per year. In 1996, a release of 19 trumpeter swans was conducted by the Confederated Salish and Kootenai Tribes, Montana Department of Fish Wildlife and Parks and the USFWS with the hope of re-establishing a breeding flock in the valley.

Efforts to improve wildlife habitat over the years have included planting food and cover crops for upland game birds, the construction of nesting islands for waterfowl, and prescribed burning to enhance brooding areas and provide browse for Canada geese. Biological, chemical and mechanical methods are used to control some species of non-native plants which have begun encroaching on the refuge. Aerial surveys are conducted periodically to monitor waterfowl numbers and nesting success.

The refuge is closed to hunting. Adjoining State-owned lands are managed by the Montana Department of Fish, Wildlife and Parks for wildlife cover, food production, and public hunting. These lands are open to hunting on a first-come-first served basis for waterfowl and pheasant shooting. The closure of Pablo NWR enhances the quality of hunting in the Flathead Valley.