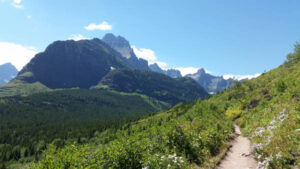 In 1910, Congress established Glacier National Park in Montana. Conservationist George Bird Grinnell played a key role in the creation of this park in order to preserve the land’s natural beauty. Indians have always revered this region. The Blackfeet, Salish, and Kootenai Indians, who have lived in the area for hundreds of years, consider it a sacred place.

Glacier National Park is named for the glaciers that produced its landscape. A glacier is a moving mass of snow and ice. It forms when more snow falls each winter than melts in the summer. The snow accumulates and presses the layers below it into ice. The bottom layer of ice becomes flexible and therefore allows the glacier to move. As it moves, a glacier picks up rock and gravel. With this mixture of debris, it scours and sculptures the land it moves across. This is how, over thousands of years, Glacier National Park got all its valleys, sharp mountain peaks, and lakes. There are more than 50 glaciers in the park today, though they are smaller than the huge ones that existed 20,000 years ago. 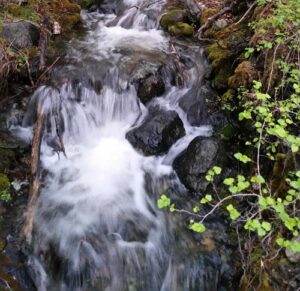 In addition to its glaciers, mountains, and valleys, Glacier National Park covers approximately 1.4 million acres and includes 200 lakes and streams. The park is also home to many different types of wildlife, including black and grizzly bear, moose, golden and bald eagle, bighorn sheep, mountain goat, and whitetail and mule deer.

Goat Lick overlook, for example, is a natural salt lick on cliffs overlooking the southern border of the park. From a viewing platform just off US Highway 2 east of Essex you are sure to see mountain goats or other animals at any time of day enjoying the lick. 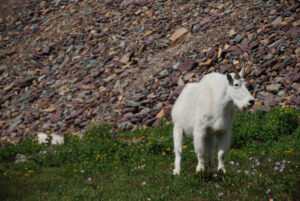 Wild flowers, too, are abundant and put on a lengthy show of color as they follow spring up the mountains all summer long.

The park is unique among US parks in its relationship with the Waterton Lakes National Park in Alberta, Canada. The two parks meet at the border shared by the two countries. Though administered by separate countries, the parks are cooperatively managed in recognition that wild plants and animals ignore political boundaries and claim the natural and cultural resources on both sides of the border. In 1932, the parks were designated the first International Peace Park in recognition of the bonds of peace and friendship between the two nations. The two parks jointly share the name The Waterton-Glacier International Peace Park. Then, in 1995, The Waterton-Glacier International Peace Park was designated for inclusion as a World Heritage Site.

There are many state and private places for camping around Flathead Lake. On the east shore you will enjoy sunsets across Flathead Lake every evening as the weather cools.  As the scenic route, Highway 35 is also the road less traveled along the east shore.  If you decide to take this route, please have patience as  the road is posted at 50 miles per hour.

How to Purchase The Ultimate Flathead Lake Vacation Guide.

At $4.99 the Flathead Lake Vacation Guide costs less then a Subway® sandwich you can buy in Bigfork or Polson and will insure you have the information you need so you have a Great Montana Lake Vacation.

For easy download.  So spend less time wondering what to do and more time doing it!

If you Need more information

Finally, if you have any questions about The Flathead Lake Vacation Guide, including advertising options and affiliate programs send us an email to : vacation@MontanasFlatheadLake.com

The GoHikeWithMike.com website contains information about camping & hiking around Flathead Lake.   Mike has been hiking, wandering, hunting and spending time in these woods for more then 20 years.  The Go Hike with Mike Trail Guide contains most every trail head around Flathead Lake.  The guide includes trails as far north as Polebridge.  It also contains the Hungry Horse recreation area, the Swan Front and Swan Valley to the east.  To the north the guide contains trail head and campground information around Tally Lake. 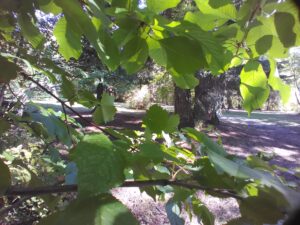 Don’t need the hiking guide, just some basic trail information, do not fret.  Mike has included some beginner to medium hikes on this website.  Depending on were you as staying there is most likely a trail head near you. Thanks for visiting, hope to see you on the trail.